We've commissioned a selection of artists who we have worked with over the years to mark our 21st anniversary. Each has contributed something connected to their work with us and received a small fee. Every week we'll add a new commission to this blog post.

Hanna Tuulikki's Deer Dancer is a cross-artform project investigating deer mimesis within dance from across cultures. The work examines how the imitation of deer behaviour constructs 'wilderness' as the site for the cultivation of hetero-masculinity and how hunting mythologies impact real ecologies. Deer Dancer was first presented as an audiovisual installation at Edinburgh Art Festival 2019, and will be developed into a live performance in 2021. At the heart of the work are five fictional hybrid stag-men characters: Monarch, Warrior, Young Buck, Fool (below) and Old Sage. The drawings depict early costume designs. 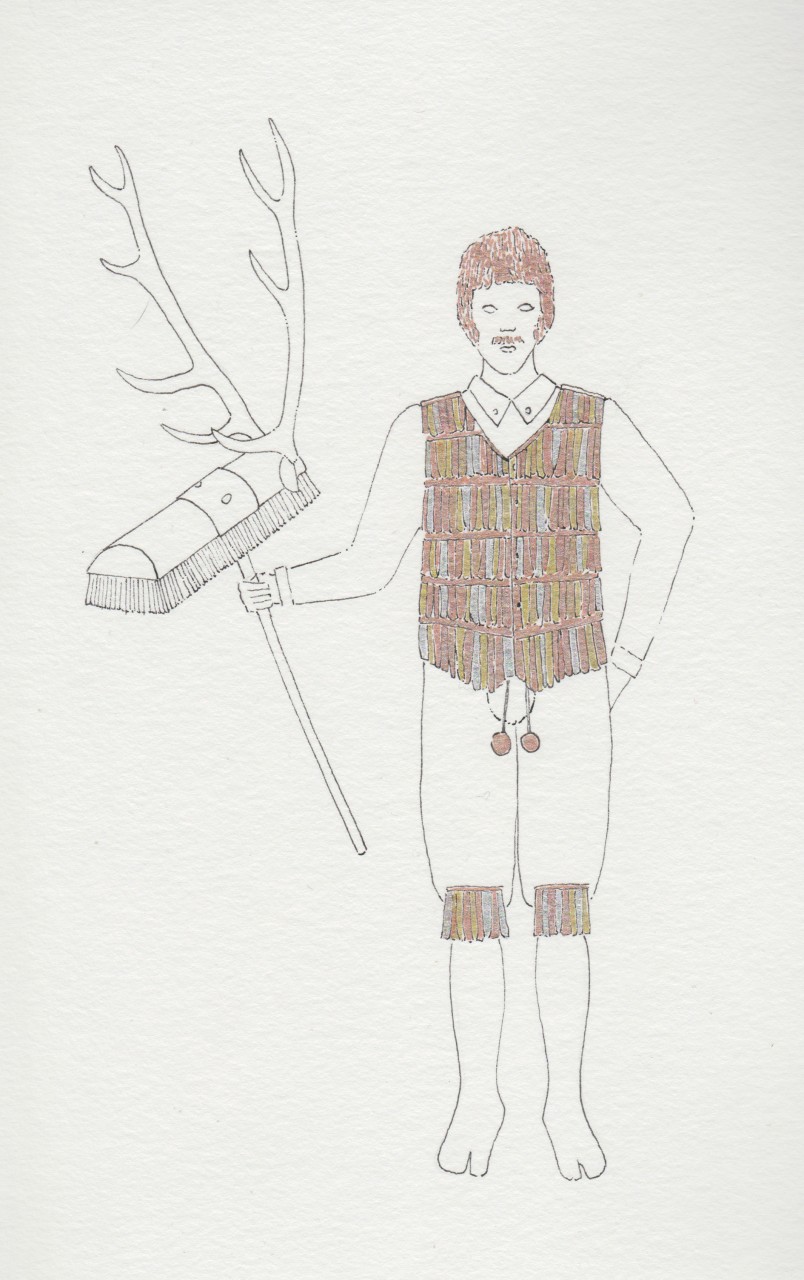 I’ve been part of the Magnetic North community since 2007 in the first Rough Mix. Looking for material for this film I found footage of an Arctic expedition and in it a man calling through a megaphone. I immediately thought of Nicholas Bone, calling artists to action, leading us with his deep knowledge of collaboration, his wry wit and his unremitting curiosity. I hope the film speaks to the imagination, joy and sense of adventure that in my experience always drives the company’s work.

We live on a small island and most of it is crummy (apart from the bits on Tripadvisor). We go about our business, thinking small crummy thoughts, like “What’s for tea?” and “I think I left the iron on”. And then we die. But before we croak, we look back on the good bits - the highs, thighs and sparkly eyes we met along the way. We snuggle up to those cosy memories with a warm crumpet glow. This is one of mine:

So there I was, two-thirds through a life of intermittent weather. All the usual veteran stuff, “Been there, bought the T-shirt and had it stolen”. You get the idea, I’m a grump.

I earn my living as a writer, so spend my days trawling the net for commissions, the literary equivalent of Tinder. Then one day,  I’m flicking through the flotsam and jetsam and BANG, there it was, a twinkly little ad and singing from it, like a freakin’ canary, was my favourite word, “Residency”. That word, it’s like an oasis, a mirage, a posh spa for the mind. A writing residency is the holy grail for jaded hacks like me, who've been running on empty for years. That’s not because I’m all burnt out, it’s because writing is tough.

Weeks later, I heard a sound. That sound was PING. Something had plopped in my inbox, “Congratulations, you’ve been accepted….” I sighed and smiled, the first of many highs.

I got on a train that went up, up, left then up. With every mile, the landscape got bigger. Bulgy bits (called hills) rose up out the ground. Endearing Scottish children stood by the tracks and waved a cheery wave (I lied about that last bit). Then the train track ran out and I found myself face-to-face with a Loch, a huge God-size puddle. I boarded a boat and stood on deck, squinting into the mist. In my white flapping shirt, I looked every inch the romantic hero, my tousled hair blowing in slow-motion (I have also lied about this bit, I just looked fat and cold). Anyway, it was genuinely, intrepid, though less so for the locals who travel that way every day.

I have to admit I was nervous. All writers are hermits so the idea of shacking up with a bunch of strangers made me feel a bit anxious. I’m an anxious person already, so think “double-anxious”. What if they snore? What if I snore? What if they’re all horrible people? And worst of all, I’d given up alcohol, so had nowhere to retreat, except the writers retreat.

I needn’t have worried. The welcome was so warm, it made me think, “These people are nicer than some of my friends”, which is worrying. There was food, fire and everyone was nice (in a non-boring way). I got a room on my own that overlooked a plus-size hill. Was it a Munro? Was it a mountain? Who gives a toss, it’s a whopping great hill, the shape of Dairylea Cheese.

One of the hosts was called Nick, a quiet man who intrigued me. He ‘sat’ well, which is a funny thing to say, but he did. When most people sit, they look like a bulgy lump slumped in a chair but Nick had elevated the ‘sit’ into an art form. Wherever he sat, he looked like an Observer double-page spread, the hill-things behind… the vast landscape of his brain. I liked him enormously. Still do.

One by one, the shy participants revealed who they were, unveiling their warm backstories and cool credible lives. One woman (a dancer) stuck some Post-It’s on the glass. They said “Working Class, West Coast”. How brilliant is that? A whole life summed up in four little words - she’s a better writer than I am!

One day, Nick took us all for a walk, like a bunch of puppies. He took us to a secret garden whose owner had just died (it’s a public space, we didn’t just sneak into some dead guy’s house). Anyway, Nick asked us to walk slow, looking at every detail down to the absolute minutiae. As a cynical, urbane, preoccupied person, it’s not the type of thing I normally do, but hey, it was great. I felt at one with nature. Afterwards, I stood by the loch / lake / whacking great puddle-thing and stared into the grey. It felt profound. It’s a profound colour that looks much better on a 360’ landscape than it does on a Dulux pot (where it would be called ‘Warm Pewter’ or ‘Bowler Hat’).

I didn’t see it coming. The big revelation. We’d talked a lot about ‘finding your own voice’. It’s the kind of thing you do on a writer's retreat, but for me, it’s always felt a tad self-indulgent, which is a cynical view, I know. When the truth is, I’ve been a full-time writer since the last century so ‘finding my voice’ isn’t self-indulgent at all. It’s a rusty old tool that’s in dire need of sharpening. And then it hit me. The big, “Who am I?” And the result surprised even me…

I’m not a cynic, I just put on a front. I’ve done it since I was a kid, so I wouldn’t get bullied but underneath (and don’t tell a soul) I’m actually quite sweet.

I’m not going to say I discovered ‘my feminine side’ because that casts women as soppy when we all know they’re not - but there is a certain aspect of the female intellect that I relate to more than my own.

I grew up rough, failed my English O-level and used to live on a building site - but my writing voice is that of a quiet, intelligent and articulate woman, with my true voice lying somewhere in between. Sexually I’m straight but in terms of text, this trans-like revelation was a true eureka moment and I am incredibly grateful for Magnetic North for helping me find my voice.

I arrived as a crudely-hewn chunk of rock, that had rolled down from the mountain. I left with the voice of Celia Johnson in Brief Encounter, so it’s apt that I left on a train.

I still can’t quite ‘get’ why Magnetic North were so kind. They welcomed me as a stranger and I left as a friend. They valued all the secret things that make up my career, the ramshackle bunch of tools and half-formed words that I use to communicate what it is to be human, what it is to be me. Magnetic North gave me food, shelter, warmth, time, space, help, money, a short blast of education and a moment of peace in the world. How humbling is that?

I wrote them a blog, comparing myself to an old postal van that they had just serviced, so it could go back to serving the community for many years to come. It’s a fitting metaphor, as there’s a modesty to what Magnetic North do that belies the depth and importance of what they achieve.

I am proud to be part of the Magnetic North family. It is a brilliant organisation and if they were running the country, it would be a kinder place. They don’t just inspire, they take that inspiration and run with it, bringing it to life in three-dimensions. They spend so much time helping others to bloom, I want them to bloom. I want to see their productions, their work, their heart spilling out onto the stage. If I could sum up my feelings in three little words, they would be, “Fund them, now!”

Magnetic North: they draw me north like a magnet.

Magnetic North's Artist Development programme is unique within the UK.  One of the most important principles of the programme is that it is open to any artist, which means paying artists for their time. Without this financial support, many artists could not afford to take time away from their work.  A financial donation from you would help us do more. We think that continuing artist development is a vital part of maintaining a thriving creative culture. If you would like to make a donation to support this work, please visit our support us page.