We have one more day in the rehearsal room and then we move on to the stage and start to work with the full set for the first time.  Sound is an integral part of the show and sound designer Kim Moore has been in rehearsals a lot to try out things - the soundtrack is a fifth voice, supporting and counterpointing the 4 human voices.  We're at the stage of running the play every day now, with one more rehearsal room run to go before we go on stage.  Simon Wilkinson, the lighting designer, watched the run on Thursday before finalising his lighting plan and we're all excited to see how all the design elements will come together at the technical rehearsals next week.

Because of the form of the play - 4 characters telling 4 separate, fragmented stories simultaneously - working out how to rehearse the production was a challenge.   Linda McLean's script is not divided into scenes, but is punctuated in two places by the instruction  BOOOOOM (if you come to see the production you'll be able to see how we have interpreted this).  In preparation for rehearsals I split the text into 8 sections, which was amended to 9 during rehearsals.  This division was made by following the 4 characters stories to find where there were events (points where something significant happens that completes a strand).  As I did this I discovered that there were points where all four stories had simultaneous events, suggesting a break in the overall narrative.  In order to visualise this, I made a 'score' consisting of 4 tracks (one for each character) running left to right, divided top to bottom by dotted lines for page breaks and more substantial lines (like bar lines on a stave) for section breaks.  This long piece of paper (made from 7 A3 sheets) is stuck on the rehearsal room wall and was a regular reference point during the first week of rehearsals when we were getting to know the text.  When you look at the score, the play progresses from left to right like a playhead running over a multitrack recording, with vertical lines marking the section breaks.

The 'score' for the play, showing the 4 horizontal tracks - 1 for each character 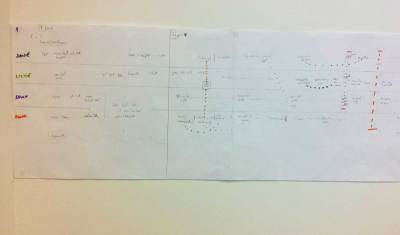 The rehearsal process has been a mix of table work (reading and discussing the script sitting at the rehearsal room table), practical preparation (voice work with Ros Steen and Viewpoints with me) and staging work (exploring the physical life of the script).  Both the Viewpoints and the voice work are practical means of unpicking the play; this practical work complements the more cerebral process of discussing the play and its characters at the table.  We developed a technique of working the sections with each character in a separate lane (like runners in a race) before improvising the action on the set.  Through this process we have gradually built up the life of the play, adding details (or sometimes simplifying) and refining the work each time.  Linda has been in the room with us for almost the whole month, listening and watching carefully, occasionally making a cut or change, sometimes clarifying a detail.