The Dream Train Revisited: A designer’s journey through lockdown 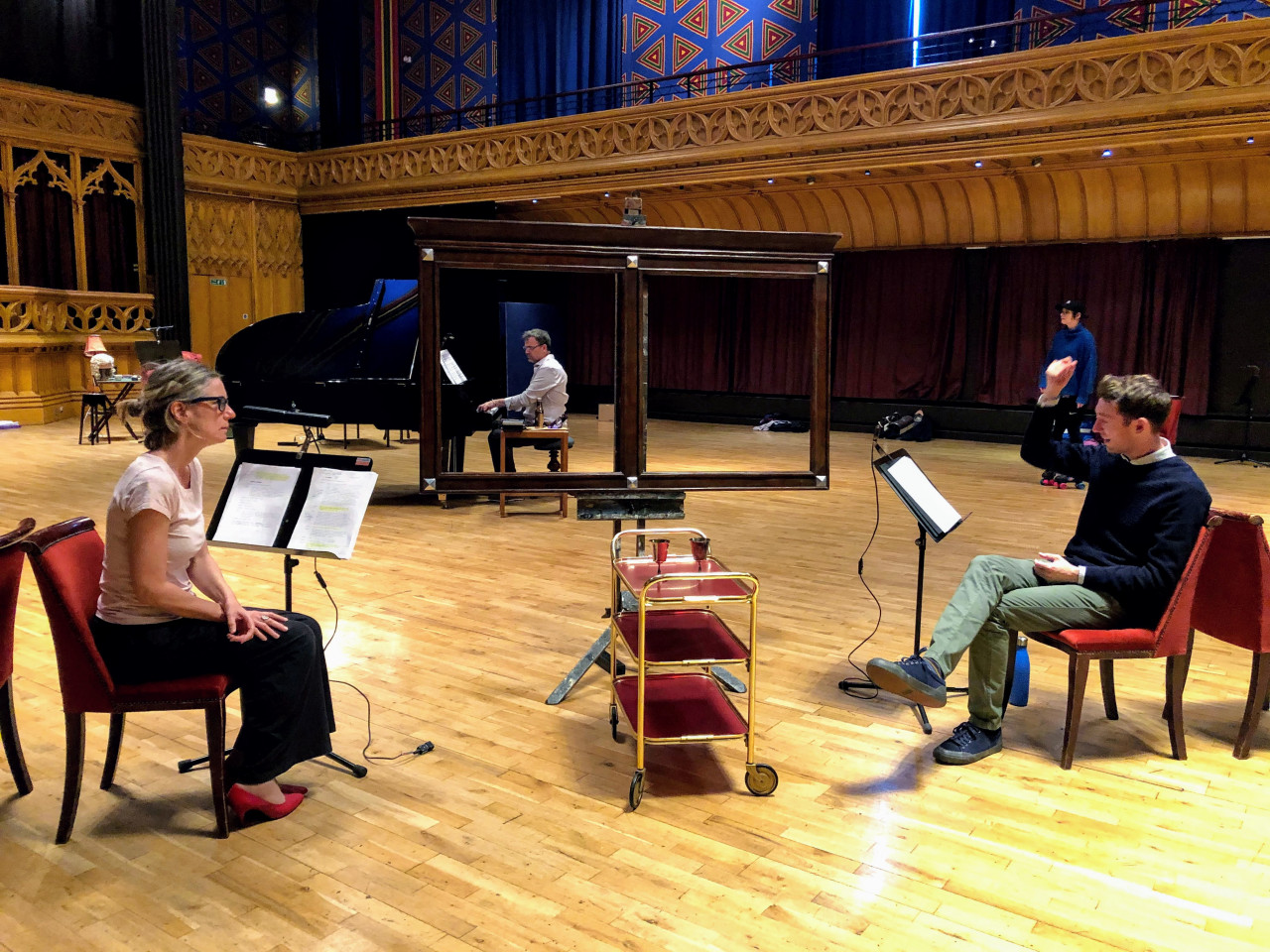 Like everyone else, my experience of the past year has been a very difficult one.

The pandemic hit so suddenly. It really did feel like someone giving the rug under my feet the most violent, shocking tug. Sprawling on my back, I watched as the thriving world of Scottish theatre that I love so much crumbled around me. It has been devastating to witness the heartbreaking struggles of colleagues and friends - not to mention the hugely daunting task of home-schooling three boys.

But one bright, shining ray of light that shone like a beacon and helped me through was having the opportunity to return to The Dream Train.

This was one of the first professional productions I designed. I was half-way through a design bursary at The Royal Exchange in Manchester, having completed a post-grad in Theatre Design at Bristol Old Vic Theatre School.

It was in Bristol that I first met Nicholas Bone, just as he was forming Magnetic North. We quite literally crossed paths - I had just moved South, away from Edinburgh for the first time, while he had just moved up there. We bonded over our mutual love of my home city, and struck up a very easy working relationship, which developed into a lasting friendship and the chance to work together on several projects, including The Dream Train in November 1999.

I remember very clearly travelling by train to Edinburgh for the first meeting - I was in my early twenties, bursting with passion and ideas, excited to be taking my first leaps and bounds into the professional world of theatre. It was a brilliant team, and I soaked up every minute of time I spent with them all, and relished the opportunity to speak at length with Tom, who was so interested & encouraging, listening patiently to my endless creative ideas.

This first version of the play was small and intimate. Taking place in Traverse 2, the audience were cocooned within the space, almost becoming a part of the set.

My design featured an arrangement of platforms, forming levels which created the various settings through the play. Allowing scenes to blend into or tower over each other; zooming into an intimate nook one minute, and the next watching as the different characters’ stories grew to encompass the whole set, their memories and voices becoming one with the space. 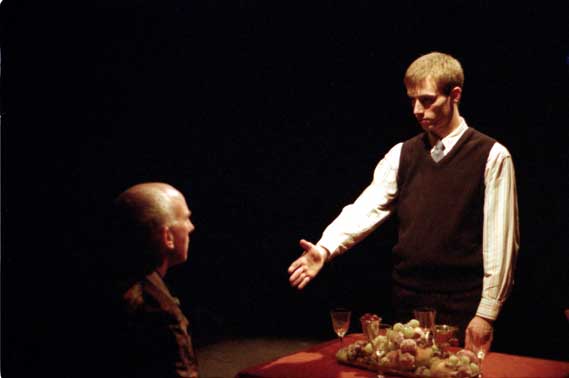 Above: David Gallacher (left) and Derek McGhie (right) in The Dream Train 1999

The set was predominantly blackest black, designed to disappear. Inky shadows formed dark depths from which the characters and props could emerge, as the story - and music - unfolded.

The levels were propped up with a rambling landscape of luggage… suitcases, trunks, bags, containing items that nodded to endless alternative journeys. Countless stories, treasured possessions, keepsakes, secrets. The idea of life in transit, the surreal dream-like state one descends into when travelling, particularly while gazing out the window of a railway carriage.

Having been brought up in a musical family, I also loved the idea that the actors would become the ‘notes’ on the ‘staves’ created by the staggered levels in the design (and was thrilled that this was picked up in one of the reviews!).

This dark landscape featured skeletal impressions of the many locations… a first-class window, beyond which a richly-draped daybed was placed, to represent the faded grandeur of the Baron’s castle. Upholstered bench seats to suggest a train compartment, that would later transform into an elegant dining room. The slightly absurd world of dreams is present in the use of surreal props. For Goldberg’s piano, an open suitcase perched on a stand, the keyboard here a row of moth-eaten books. 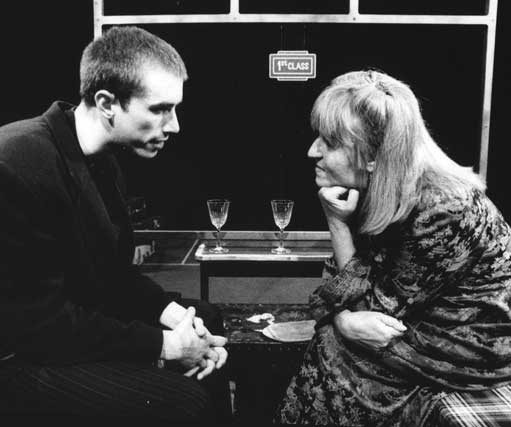 Above: Derek McGhie (left) and Mary McCusker (right) in The Dream Train 1999

The beautiful and haunting Goldberg Variations that formed the backbone of the play were on endless repeat on my walkman for many months as my designs developed. I loved listening to Glenn Gould’s famous recordings, and spent many hours absorbing the two very different interpretations. The first one is a bold and dazzling performance from the early stage of his career, the second more considered, recorded a couple of decades later.

Fast-forward to 2019, when Nick first contacted me about revisiting The Dream Train to mark Magnetic North’s 21st anniversary. I was delighted to have this unique opportunity to re-visit an old design at a very different stage of my career. I couldn’t help being amused by the comparison to Glenn Gould’s two recordings of the Goldberg Variations so many years apart. Here I was a couple of decades later, with a good twenty years of living and designing under my belt. It would be interesting to see how I responded to the words and music this time around.

Little did I know what was coming…

As the pandemic unfolded and this version of the play moved towards being a filmed piece, we all had to get to grips with the reality of trying to create and film theatre within this strange new world of complicated rules, masks and social distancing.

However, despite the difficulties faced, a new version of the original design began to form in my mind.

The location we filmed in - the stunning Main Hall of The Hub, at the top of Edinburgh’s Royal Mile - was an absolute gift. This richly architectural space, steeped in history, created the perfect platform for our Dream Train world to occupy. The levels from the original play were replaced here by a wide, open and expansive landscape in which we could place the various scenes and enjoy, particularly within the medium of film, endless layering of the different locations.

From a practical point of view, it was much more difficult to source things than usual. The pandemic meant we all had to work even harder… and the thought of not having access to my beloved network of trusty charity shops had me breaking out in a sweat. This, however, simply made me more determined, and strangely the right things seemed to fall into my path at just the right time: the set of faded, velvet chairs to form the train compartments (which I discovered by chance were originally from Perth Theatre); the lucky gumtree find of a large, paint-strewn easel, etched with Grey’s School of Art, which would represent the train window - a little piece of Aberdeen in the mix; lamps borrowed from Dundee Rep, to create pools of light from the East Coast; the Edinburgh Typewriter, which replaced Goldberg’s distinctive suitcase/bookcase piano from the original show.

This typewriter provided a suitably surreal ‘instrument’ upon which Goldberg could type out the never-ending sheets of music, the clacking of the keys morphing with the notes played on the real piano beyond. A soporific metronome to punctuate the notes of the piano. I’m quite sure that Tom would have enjoyed this curious collection of flotsam and jetsam brought together in one place, from far and wide across the country.

We made no apology for the filming detritus… the lights, stands, and cables snaking around the space seemed to connect all the random pieces of furniture and props. As I stood quietly, watching the filming, I loved seeing how the cables curved around the space, spreading out and coming back together. Undulating lines, reminiscent of the railway tracks stretching across the land. 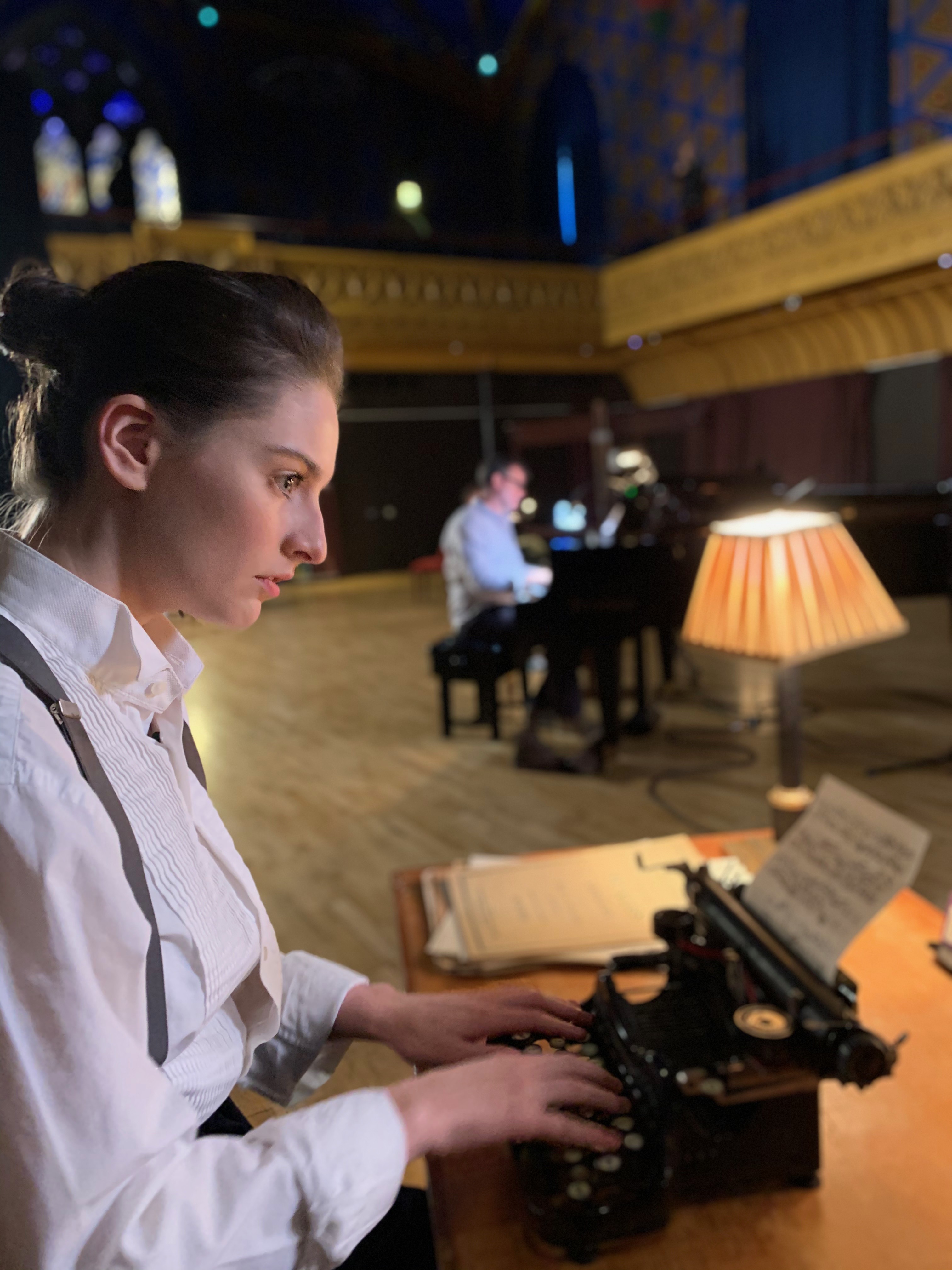 Above: Rachel Flynn (left) and John Harris (centre) in The Dream Train 2020

I am hugely grateful I had the opportunity to design The Dream Train twice, and to work with such an amazing and talented team, navigating our way together through the process of creating art in a lockdown. As the year progressed, I really valued my experience filming at The Hub. As foundering theatre projects increasingly switched to filmed versions, I was able to apply my newly developed skills to a similar project, translating the National Theatre of Scotland’s award-winning play, Adam, which I had designed in 2017, into a bold, new production for the BBC/Hopscotch Films (currently showing on iPlayer). And again, creating a covid-safe art installation to accompany the filmed piece Family Portrait for Glasgow-based contemporary dance company, Barrowland Ballet, which allowed a bubble audience of one family at a time to view it live. We could not believe how exciting it was to have these groups of just three or four. It was a real, live audience, albeit a small one, and that was a huge leap forward.

In the coming months ahead, I am fortunate enough to be working on an ambitious, large-scale new musical, Orphans (based on the 90s cult classic film of the same name written and directed by Peter Mullan) for National Theatre of Scotland, which is scheduled to open at the SECC Armadillo next April, followed by a nationwide tour.

Just as The Dream Train was the bright spark that kept me afloat at the beginning of the pandemic, this new musical is a gleaming light flickering on the horizon. Signifying a time when - we can only hope and pray - people can once again crowd together to fill an auditorium with laughter and tears, and enjoy the completely unique, exhilarating experience that only live theatre offers. Until then, I will keep moving along the tracks towards the light.