Dust, and all that… combines elements of immersive theatre with dance, live music, new writing, a recorded soundscape and video.  A collaboration with dance-theatre company Curious Seed, it was presented at Summerhall in 2013.

Viewers walk alone through a series of rooms, glimpsing fragments of stories - videos playing on screens in abandoned rooms, photos pinned on the wall, lists of names, locked doors, piles of furniture and objects all alluding to memories left behind – before arriving in a large room where someone sits unravelling gold thread which is spun like cobwebs around the space…, is it a waiting room, a holding centre, purgatory?

Dust, and all that... plays out a series of fragmented scenes which repeatedly disperse and materialise - giving insights into and different perspectives on the lives of the 8 people already present in this place.

A simple dance begins to emerge, passing from person to person, from cast members to audience. The performance culminates in a final shared, transcendent moment that leaves everyone with their own impressions and understanding of what has happened, asking them to consider what they’ll leave behind as they head back out into the cold.

Presented as work-in-progress in and around the Dissection Room at Summerhall in December 2013.  Supported initially by the National Theatre of Scotland, Dance Base and at Rough Mix, it was further supported by Creative Scotland and Summerhall. 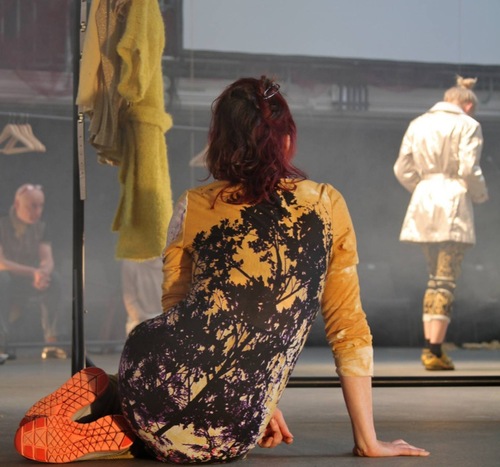